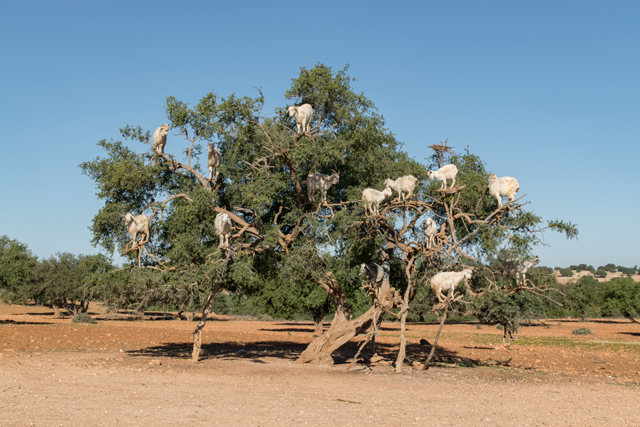 Marrakesh is the ideal location base yourself for a variety of day trips outside the city. There is an abundance of tour companies which offer excursions to locations like the Atlas Mountains, Berber Villages, Palm Cove for camel rides, and the beachside town of Essaouira. We decided to change up the scenery and take a day trip from Marrakesh to Essaouira.

Instead of taking a Supra Bus straight to Essaouira, we decided to use a day tour company, and instead of returning with them, stay a couple of nights before traveling north to Casablanca. We decided to do this so we could stop at the famous goat trees and an argan oil "factory" along the way. The journey from Marrakesh to Essaouira is also quite long, so it's nice to break up the ride.

After much research on GetYourGuide, we decided to use Marrakesh Travel Services for our Essaouira day tour from Marrakesh. At 8 am, along with other pre-booked travelers, we boarded a modern minibus from Café de France located at the edge of the old town square, Jaama el-fina. Once on the bus, the guide announced to the group what to expect from the day and the stops we'd be making during the drive.

Tip: For those heading to the restroom at the first stop, pick up some toilet paper on the way in and leave some change to show the cleaning lady little appreciation.

The landscape beside the road is beautiful and unique. Something I was looking forward to seeing was the tree goats of the desert. Literally... Goats in trees. They climb up there (voluntarily) to eat the fruit of the Argan trees, and are more than happy to chill off the ground. We spent a couple of minutes admiring these magnificent creatures. You'll need more change for the goat owner if you take any photos. Next stop was the Argan oil "factory." I put that in quotation marks as the oil is created by hand in a three-step process. The women work hard to make this fair trade, organic product, so I was more than happy to support them with a purchase. Finally, we arrived in the beachside town of Essaouira around midday. We were ready to explore and met by the charismatic Ziad, our Essaouira tour guide. Some of the travelers wanted to explore on their own, which they were welcomed to do, but we decided to follow along with Ziad.

Ziad took us through the docks and into the gated old town, locally known as the "Médina." The whole city is colorful, painted in blue and white. It reminded me of the beachside towns in Greece. As a group, we walked down little alleyways embellished with old and new, brightly painted doors. We saw bustling market streets, French-inspired cafes, and an array of restaurants which we were to revisit in our spare time in the afternoon.

Essaouira is indeed peaceful compared to Marrakesh; the streets are busy yet cohesive. I felt calm at all times despite the presence of a lot of people. There was no yelling or hassling in the marketplace like Marrakesh. The shop owners are civil and would allow you to look at their wares quietly. If you're not interested, they will let you go in peace. Zaid brought us to an interesting shop off one of the main market streets in the Médina; it was a wood workshop. The smell of freshly cut wood overtook our senses as soon as we walked in through the door. Random pieces of timber were stacked up everywhere, and the shelves were full of half-finished pieces of art.

We then walked through to the shop full of varnished wooden masterpieces. The details were so intricate and stunning. The skill, time, and effort that went into these artworks are just extraordinary. There was never any pressure to buy anything along the tour, Ziad was just passionate about sharing his culture and the talents of the Moroccan people.

Zaid wrapped up the tour shortly after, and we all had a couple of hour's spare time. At this point, our tummies were rumbling, so we walked beyond the walls of Médina and found a secluded restaurant on the beach. Being located on the water, naturally, prices are a little higher at this restaurant, but it was entirely worth it. With regained energy from the strong coffee, we happily feasted on fresh fish at Le Chalet de la Plage. Essaouira is known for its fresh seafood, and the city's reputation was fulfilled. Everywhere we went, it was perfect.

At precisely 4 pm, the group re-gathered to board the bus meaning the end of their day trip from Marrakesh to Essaouira. As we had decided to stay for two more nights, we grabbed our bags from the van and said our farewells to those returning.

In the market place later that night, we ran into Zaid again. He was sitting at a café with his friends. At first, I didn't register someone yelling out to me (I was probably ignoring it after the noise in Marrakesh), but then he yelled "Australia!" which caught my attention immediately. We said we were going to dinner, and he brought us to a particular restaurant after telling him we wanted dinner with a sea view.

We ate dinner on the terrace of Restaurant ll Mare, with unobstructed views of the sunset over the ocean. It was so peaceful up there, and I even indulged in a glass of wine. The food wasn't the best we tasted in Essaouira, but it was still reasonably good.

Overall I thought the day trip from Marrakesh to Essaouira was great, and it was everything we expected. Check out the tour we took here.

I do have two tips for you for your day trip from Marrakesh to Essaouira:

Tip 1: Bring snacks with you. It's quite a long drive from Marrakesh and lunch isn't until after the tour in Essaouira.

Tip 2: Keep up with the guide! We lost him for a little while when we got distracted then had to trace his footsteps!

If you have any questions about Marrakesh Travel Services or Essaouira, please comment below!

booking.com has over 10,600 properties in Morocco including hotels, apartments, and hostels. You get free cancellation on most rooms and the best price guarantee.